The European Endurance Legend Cup (EELC) is a classic motorcycle championship which includes 4 endurance events. The objective is to run motorcycles built before December 1986 in a real FIM European classic endurance series.

The teams are composed of 2 or 3 drivers, who take turns during a race of 4 hours. 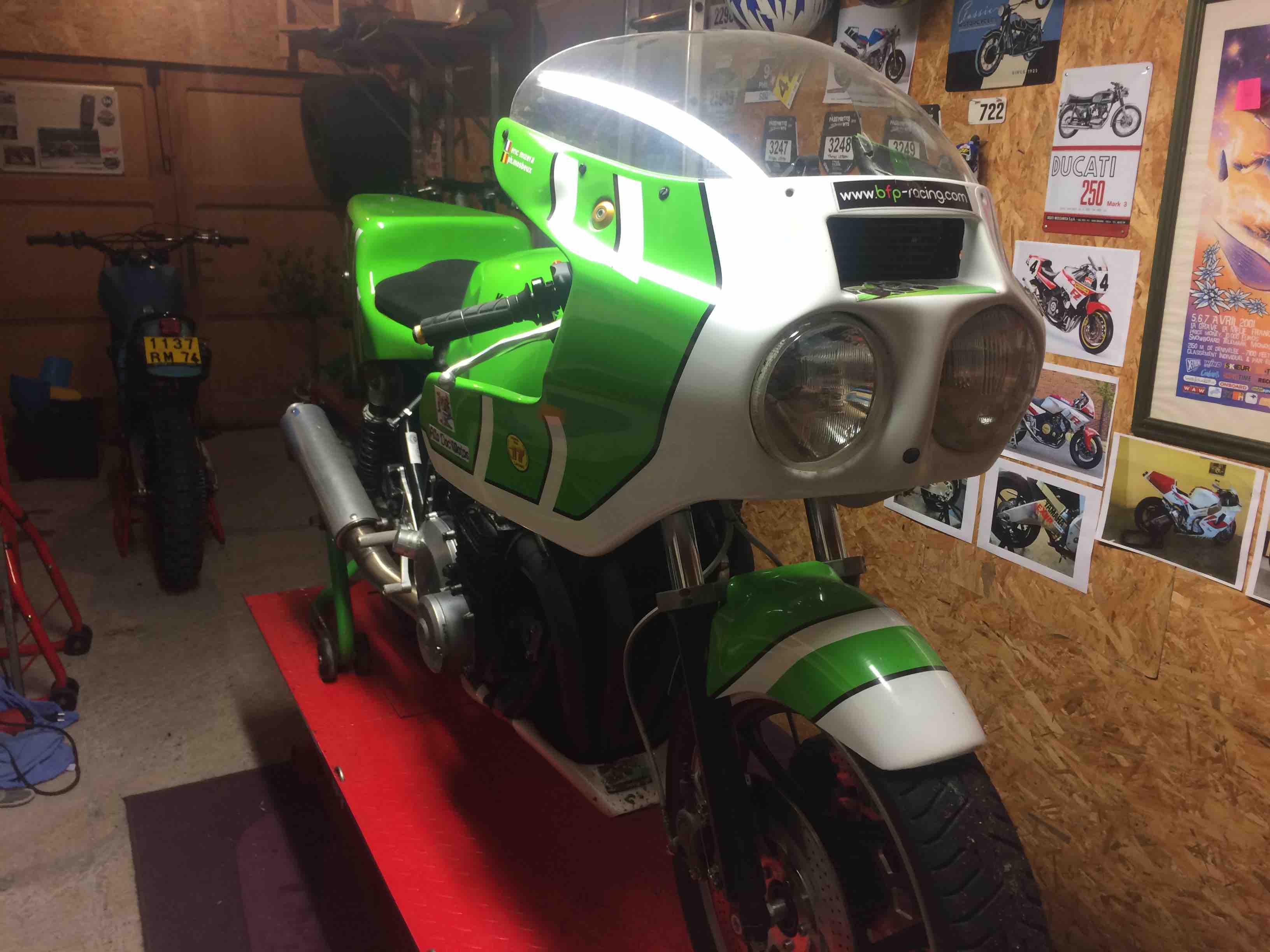 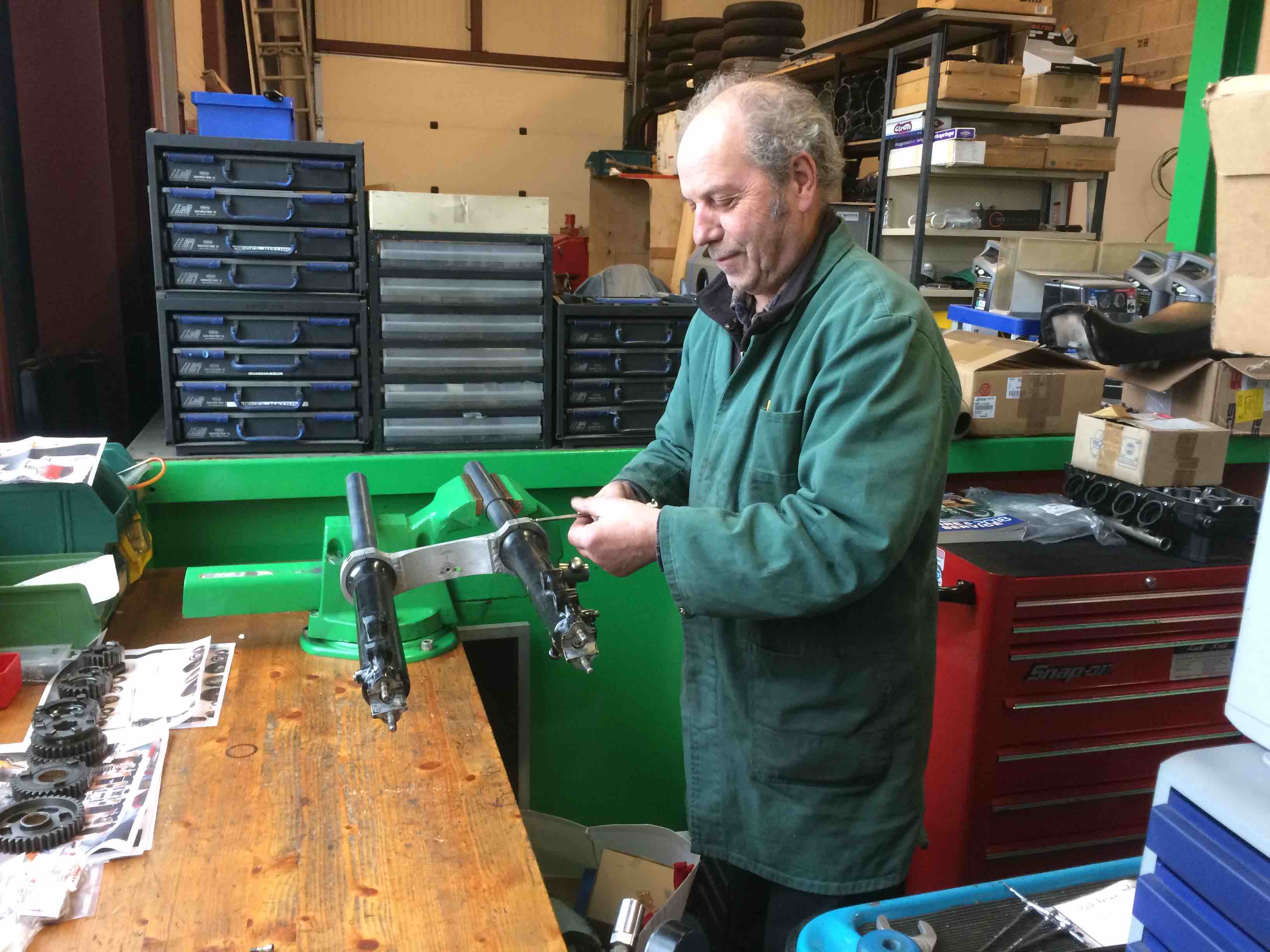 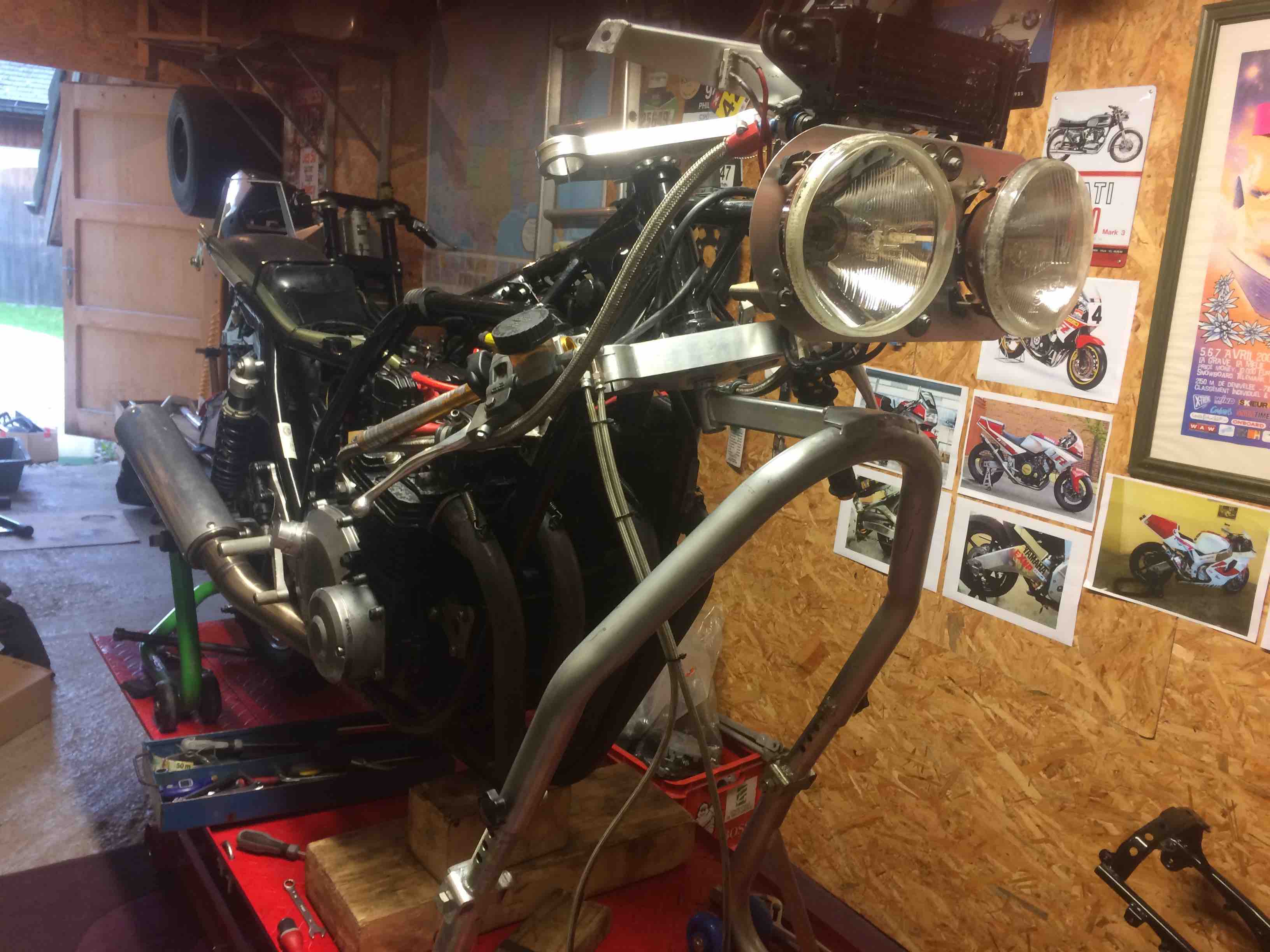 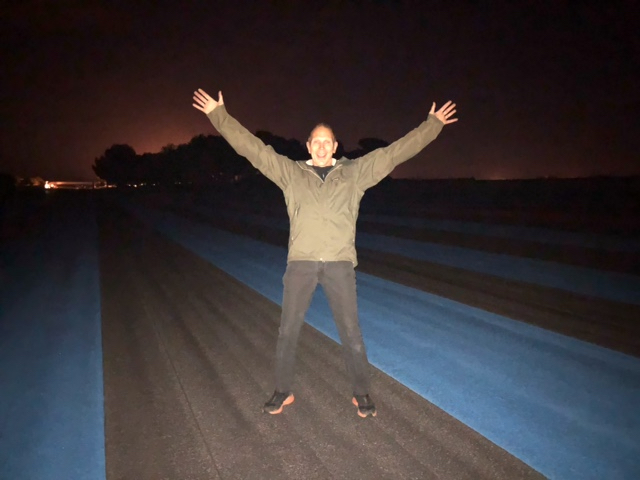 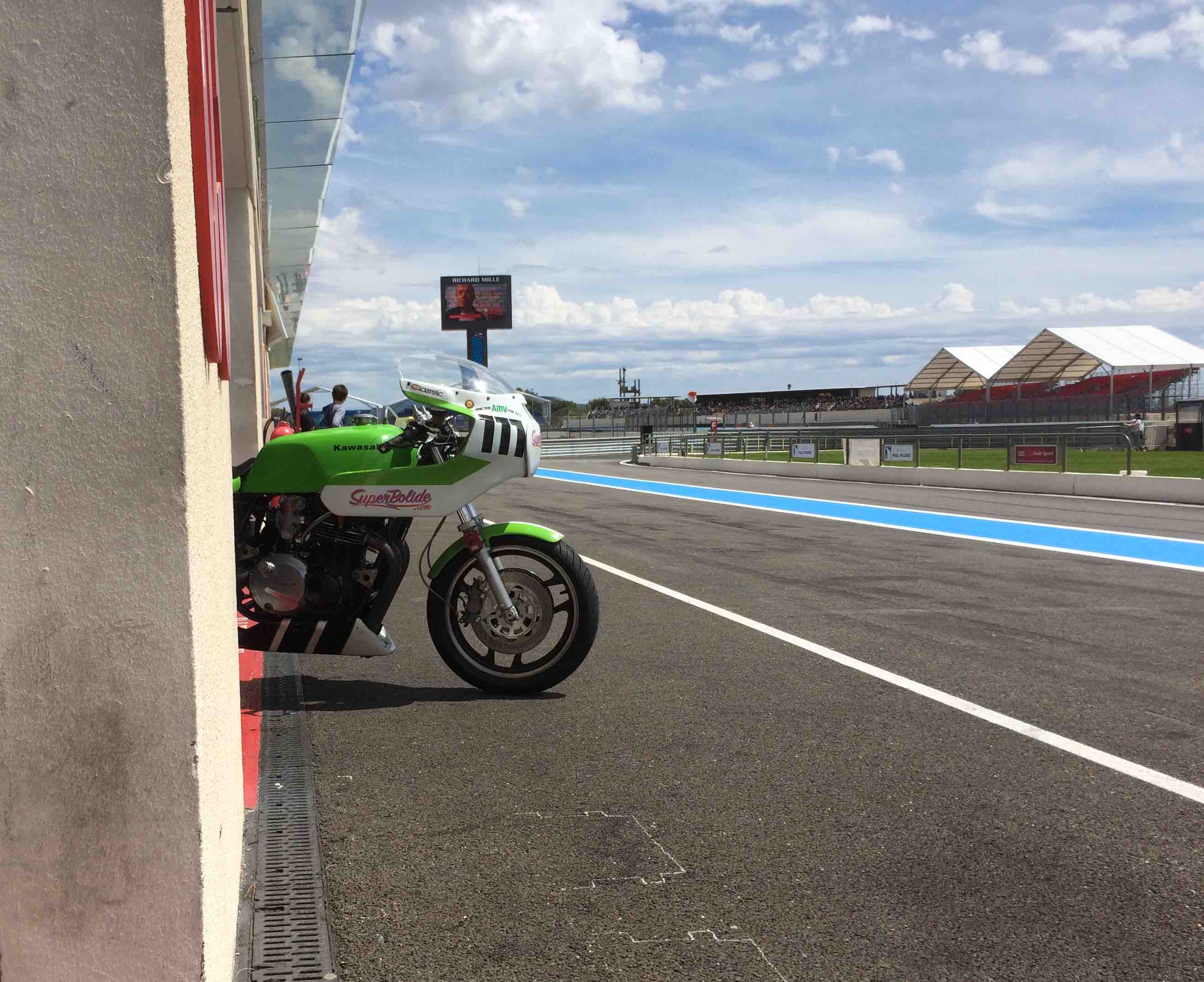 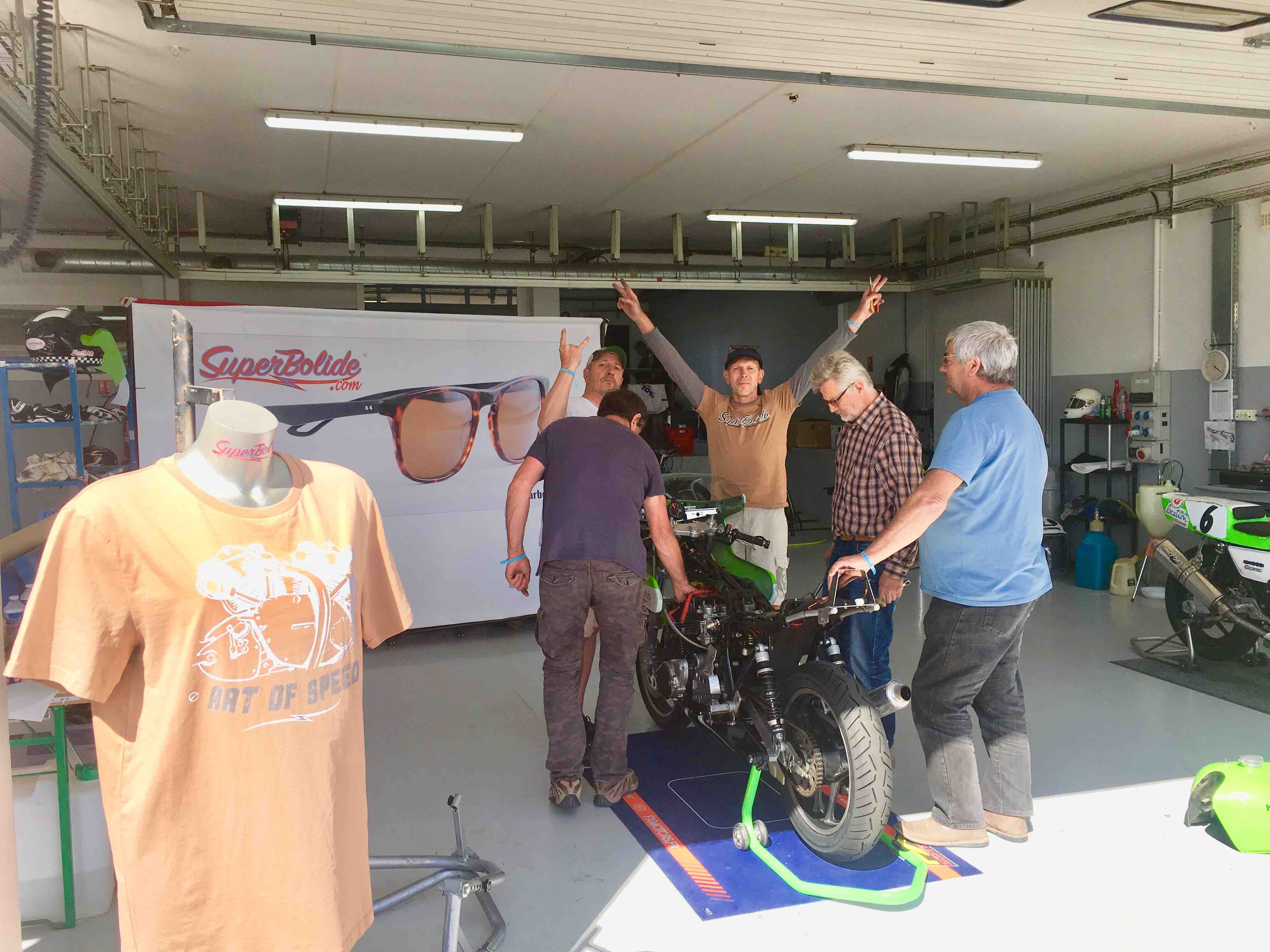 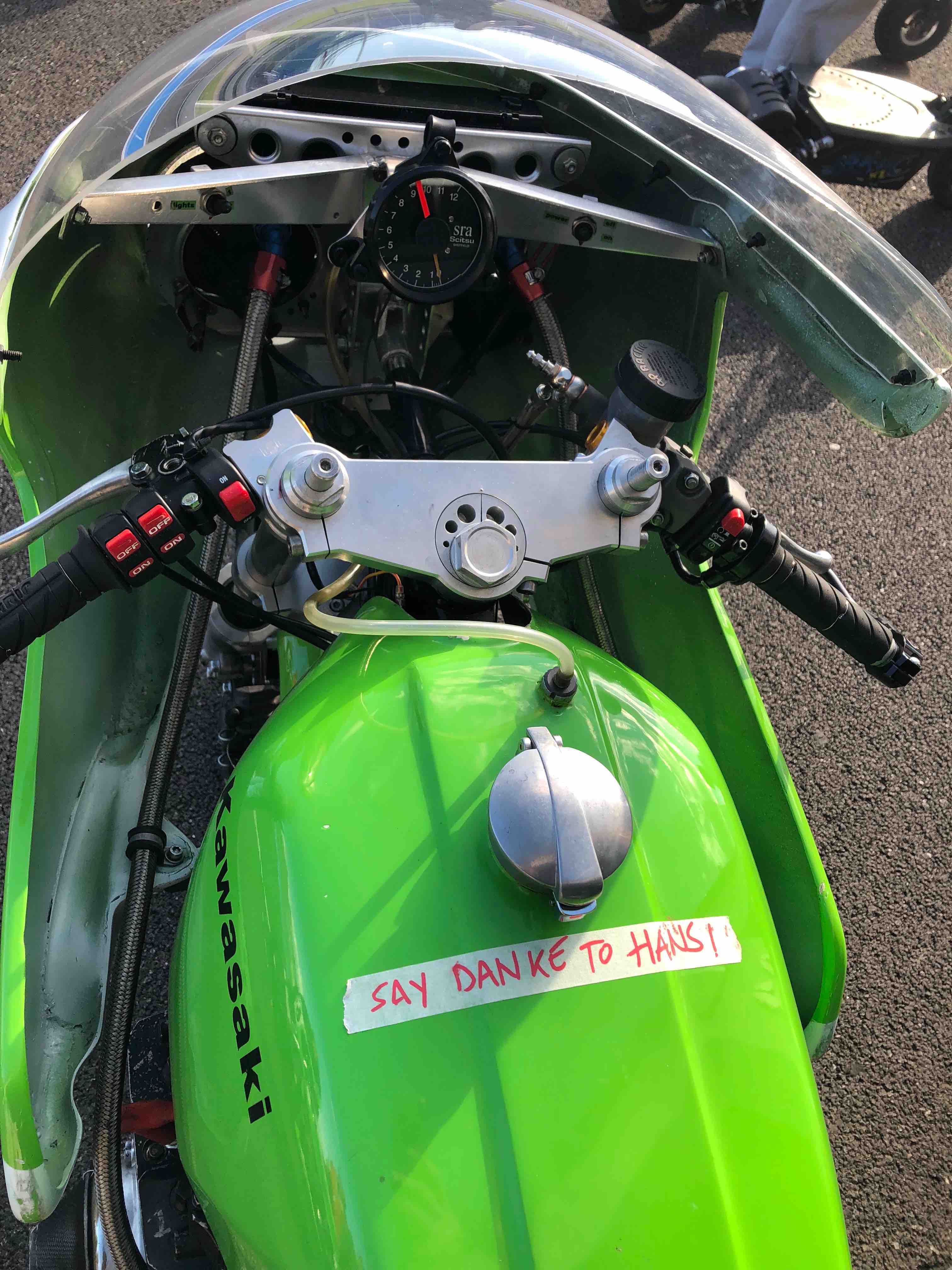 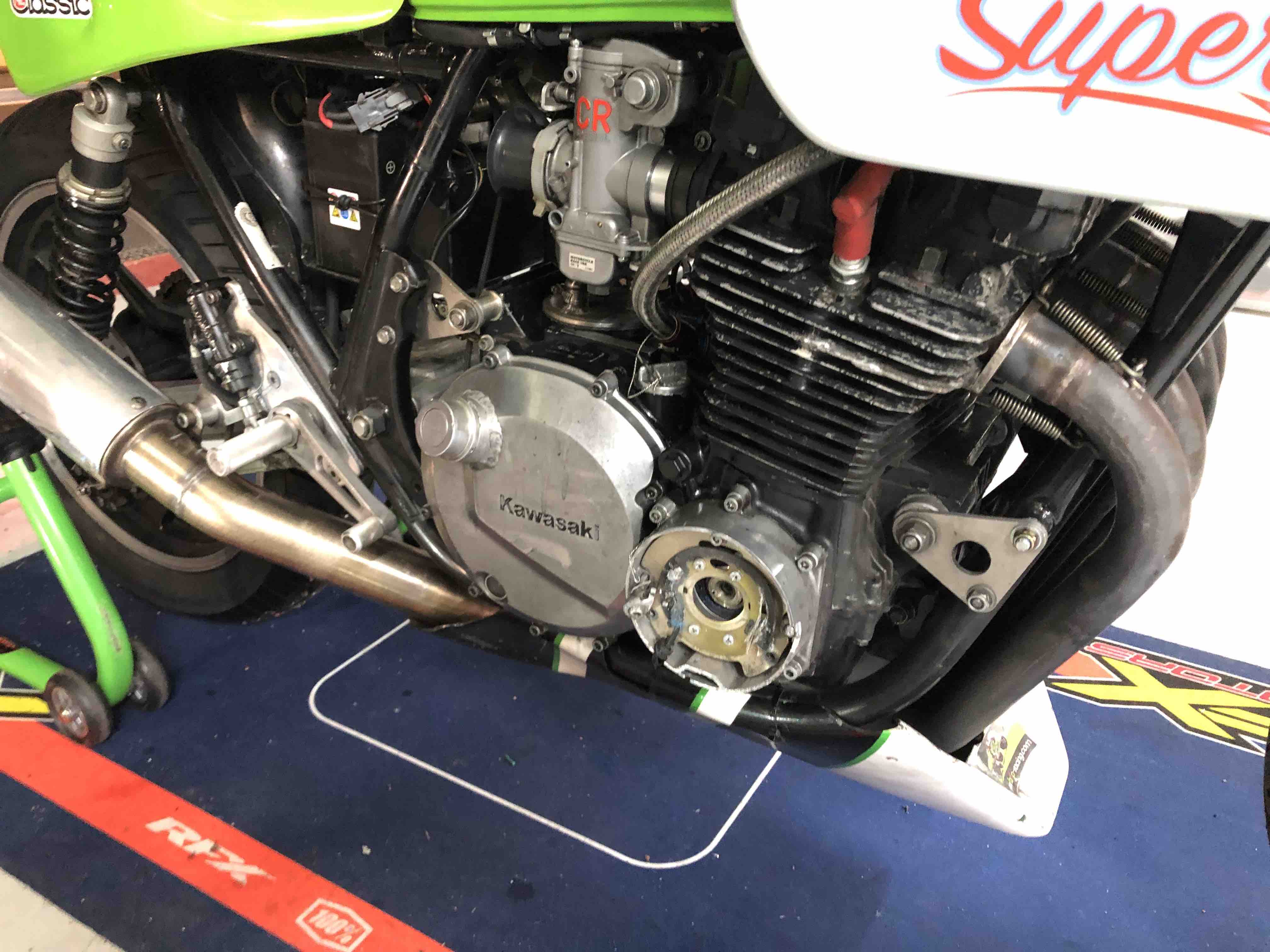 Team SuperBolide raced a Kawasaki 1170 #111 in the EELC 2019 Classic Class for the first round during the Sunday Ride Classic. The riders were Denis Zanon, Christophe Gaime, and team manager Philippe Lebeau.

Our Kawasaki is bought to Philippe Mosbeux, a very good classic race rider, with Eric Mizera as teammate.  This bike set pole position at the 2012 Bol d’Or Classic and qualified second at Spa.  It has not raced in several years.  For its purchase, I was very effectively advised by Hans Kuhl, former Kawasaki dealer in Rennes, a man enjoying his retirement by building beautiful bikes that twice won the Bol d’Or Classic (with Gerard Jolivet and Christophe Gaime).

The engine of our Kawasaki is entrusted to Patrick Long, the boss of the Kawasaki Technic Moto shop in Annecy.  A complete dismantle to check the parts shows the Wiseco pistons are brand-new and all moving parts in perfect condition!  Patrick rebuilt the engine carefully, optimizing all settings with some valuable tips from Hans.

The reassembly of the engine in the chassis allows us to optimize components and become familiar with the motorcycle for faster mechanical interventions.  In its current configuration, the entire motorbike is built to race spec in every detail. 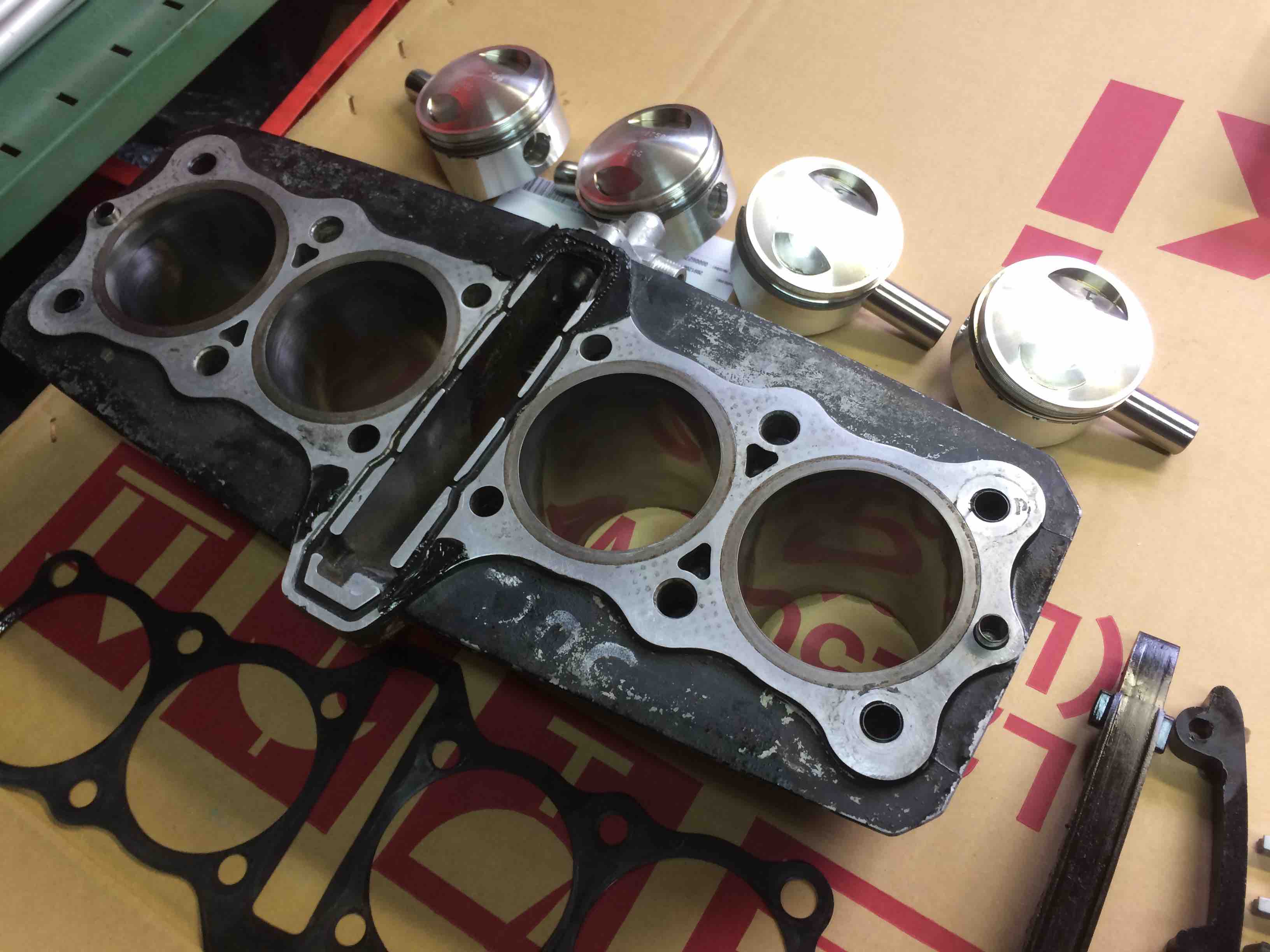 A newly revised engine is good step, but it is necessary to check that it works properly.  In addition, I have never ridden this motorbike.  We scheduled a test on the Circuit de Bresse in France: three morning sessions done at low rev.  This circuit is small and the big 1170cc seems to be quite heavy for this kind of track.  A further complication: the Avon tires are back on the track after six years of non-use.  To my surprise, the bike is nice to ride, even if the tires generate a “Holiday-on-Ice” feeling.

In the afternoon, I put more revs, which reveals a problem: the bike seems powerful but has a huge carburation hole between 4000 and 5000 rpm.  Due to the DB killer or some other reason?  (We don’t know.)  The next ride will occur during the EELC tests on May 10, the day before the race.  There, at the Paul Ricard track, many parameters will be different: altitude, temperature, spark plugs, no DB killer.  We will make carburetion tests before qualifying to eliminate the mid rev hole…

Thursday May 2nd and Friday May 3th

Morning spent with Alain Genoud, boss of Godier-Genoud and two-time winner of the Bol d’Or. Alain meticulously revises the fork and I buy some parts to optimize the 1170. Alain will be at the Sunday Ride Classic, a big plus because he knows how to pre-adjust the fork to optimize the settings.

Thursday, May 9
Let’s go to the Paul Ricard Circuit! We leave the rain to reach the sun. We take advantage of each stop to put a coat of paint on the fairing of the Kawasaki…
Arrival on the circuit in the evening. We join Denis Zanon, friend of 30 years and co-rider, and our friends of Team No.6 Hyper U La Montagne managed by Hans Kuhl, with whom we will share the box and memorable moments of mechanics. We have the pleasure do a jogging on the track at night: Wonderful time!
Back in the box, I discover new electrical problems; no light… The bike should pass the technical control the next morning, no question of going to bed without having solved the problem, which will be done around midnight.

Day dedicated to technical control, free practice and qualifications. In fact, this day was mainly devoted to solving technical problems and optimizing the motorbike. If the time at the stand was stressful, the sessions on tracks were extraordinary. The Circuit Paul Ricard is absolutely great and the track has been resurfaced since the Bol d’Or Classic 2018. As a result, the grip is great, allowing angles that I never imagined with the narrow tires of our “old”motorcycles. Not being able to participate in the morning free practice, because obliged to solve the last problems on the machine before the technical control, we have just time to a quick free practice to discover the bike and (re)learn the circuit. It does not matter; the qualifying sessions will be used to optimize our Kawasaki 1170. We will successively settle, among others, problems of brake, electricity… Qualified in 38th position, we did the test session at night, which highlights an alternator problem. Obviously, during the race, we will have to change the battery at each pit stop, without being sure to have enough electricity power reserve for the 40 minutes of each relay. Not ideal for a performance and, basically, to finish the race… 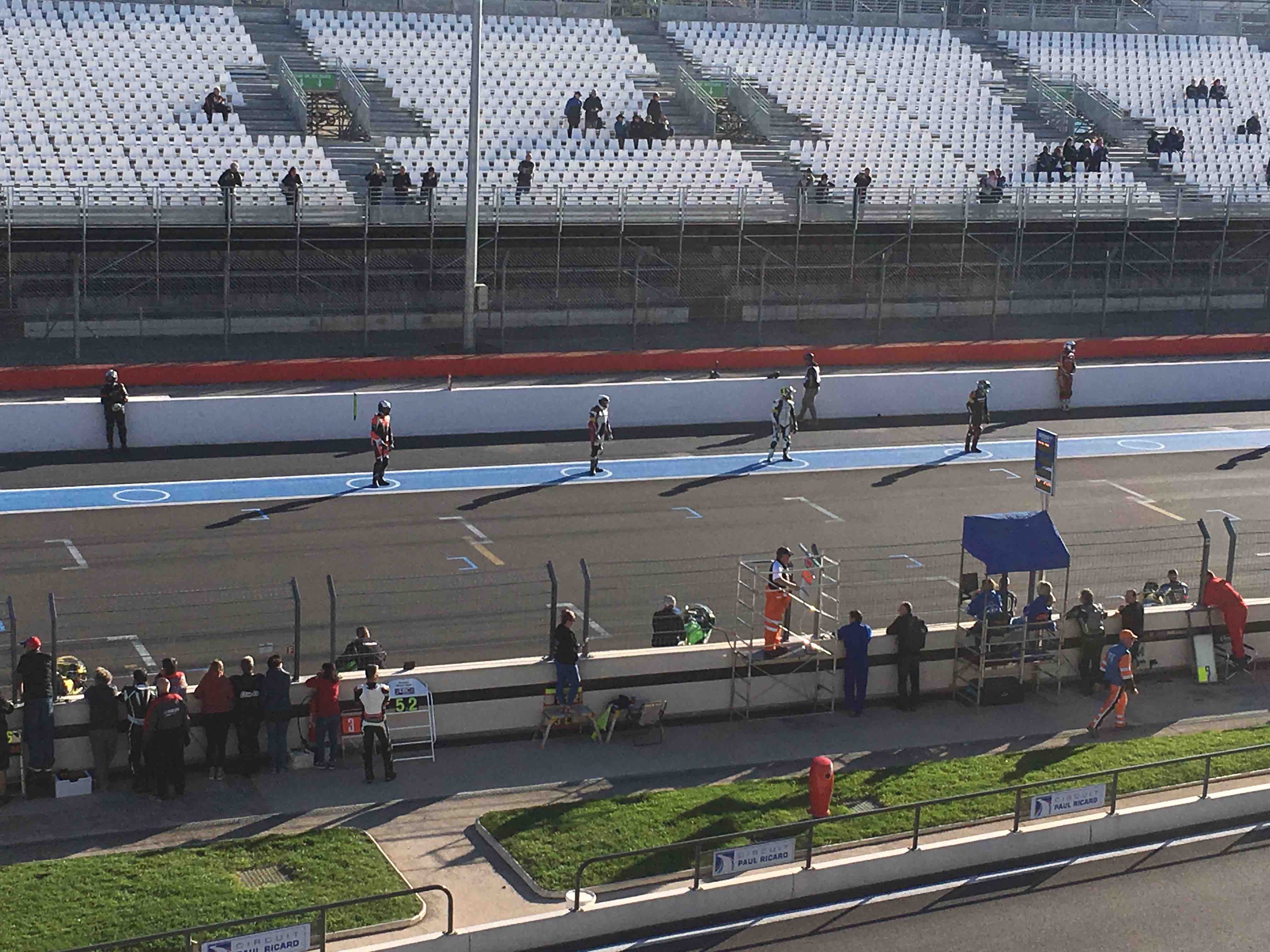 It’s race day Today! The practice program is light, with just a warm-up session scheduled in the early afternoon. This short session will allow us to break in the rear tire and to train our brains at high speeds and hard braking. In the morning, we take advantage of the sun of the “Midi de la France” to walk through the Sunday Ride Classic exhibition. I bump into Kevin Schwantz, just walking in the crowd. Except Desmocedici, MX and flat track motorcycles, almost all the machines of my dreams are here: Honda NSR, ROC 500 Yamaha, Honda RC213V-S, Yamaha 500 and 750 OW, Ducati Panigale V4, MV Agusta, Honda CBX, Suter mmx 500… I’m like a teenager flipping through Playboy mag! However, our Kawasaki 1170 requires some caring and we do not dwell on all these beauties. Above all, we still have to solve our problem of power charge. Finally, Hans will investigate the problem, allowing us to find the electricity needed for the operation of the engine and lighting for the four hours of the race. Let there be light!

The start will be a Le Mans type. When the national flag checks, we will run across the track, start the engine and and start the race! We plan on six relays of approximately 40 minutes each.

At 6pm, the tension begins to rise. I asked my teammates to have the honor of doing the start and ride the first relay. At 6:40, I ride the bike for the training lap. Ten minutes later, we simulate a first start followed by a tires warm up lap. At 7pm, the real start is given. I run, start the engine… and narrowly avoid a pilot still walking in the middle of the track! He ran off, was injured and he ended limping in slow motion… I take this good start to win few positions. The first lap is not very fast because we are still tight and riding in group. I only gain one or two positions, but I spot where the three bikes in front of me brake, which allows me to overtake them during the next two laps. The peloton stretches and the speed increases. In the sunset, the sensations of speed are magical. I found a good line in the double right of Beausset, this very long mythical and complex bend; the pleasure is gigantic! I feel great. We are three riders fighting to overtake each other during several laps. From the 35th minute, I start making mistakes, which I understand to be missconcentration. The Mistral wind begins to blow hard. I make the last laps “safely” then come back to the box to give the Kawasaki to Denis. We waste a lot of time refueling, our fast filling system proves to be extremely slow… Denis takes the track. If he has a long experience in off-road, including MX and Supermoto, this is his first race in Endurance. He pilots with very good pace. Three laps from the end of his relay, appears “111 Crash – Pilot OK” on the screens of the box. Damned! Denis lost the back and fell. The bike sled for a long time until the ground ripped off the ignition. Game Over!

I walk to the entrance to the pit lane, where the truck will bring back Denis. I think back to the 2013 Bol d’Or Classic, my first Endurance race. I crashed in the second run and I was back at the boxes with the bike in the van. On arrival, the team manager rushed to the bike to see the damage, without worrying about my health. This is, psychologically, very difficult moments, where you feel great guilt being responsible for the giving-up of the whole team and wrecking the whole race. It took me a long time to accept my mistake and I learned some great lessons in team management. Today, I am the team manager. So when Denis arrives, I worry about him before taking care of the bike. Denis is wounded at a finger and especially the morale at half mast. Apart the damage at the ignition, the bike is OK. Infortunaltely, Christophe will not race.

The overall experience of the weekend remains very positive. We learned a lot, both in the stands and on the track. We met great peoples in the neighboring teams and especially in the team of Hans Kuhl and Gerard Jolivet, two top personalities!

On Sunday morning, we stored the bike and equipment in the van, and then went for a walk in the stands of the Sunday Ride Classic. Definitely, this event is really amazing! Before leaving, Denis, his son and I went to the restaurant of the circuit for a last coffee, where we meet quite by chance Freddy Spencer. Great, I just finished reading “FEEL”, the remarkable book he wrote, and I have some questions. We chat several minutes together while he warmly dedicates his book. Nice ending for an extraordinary weekend! 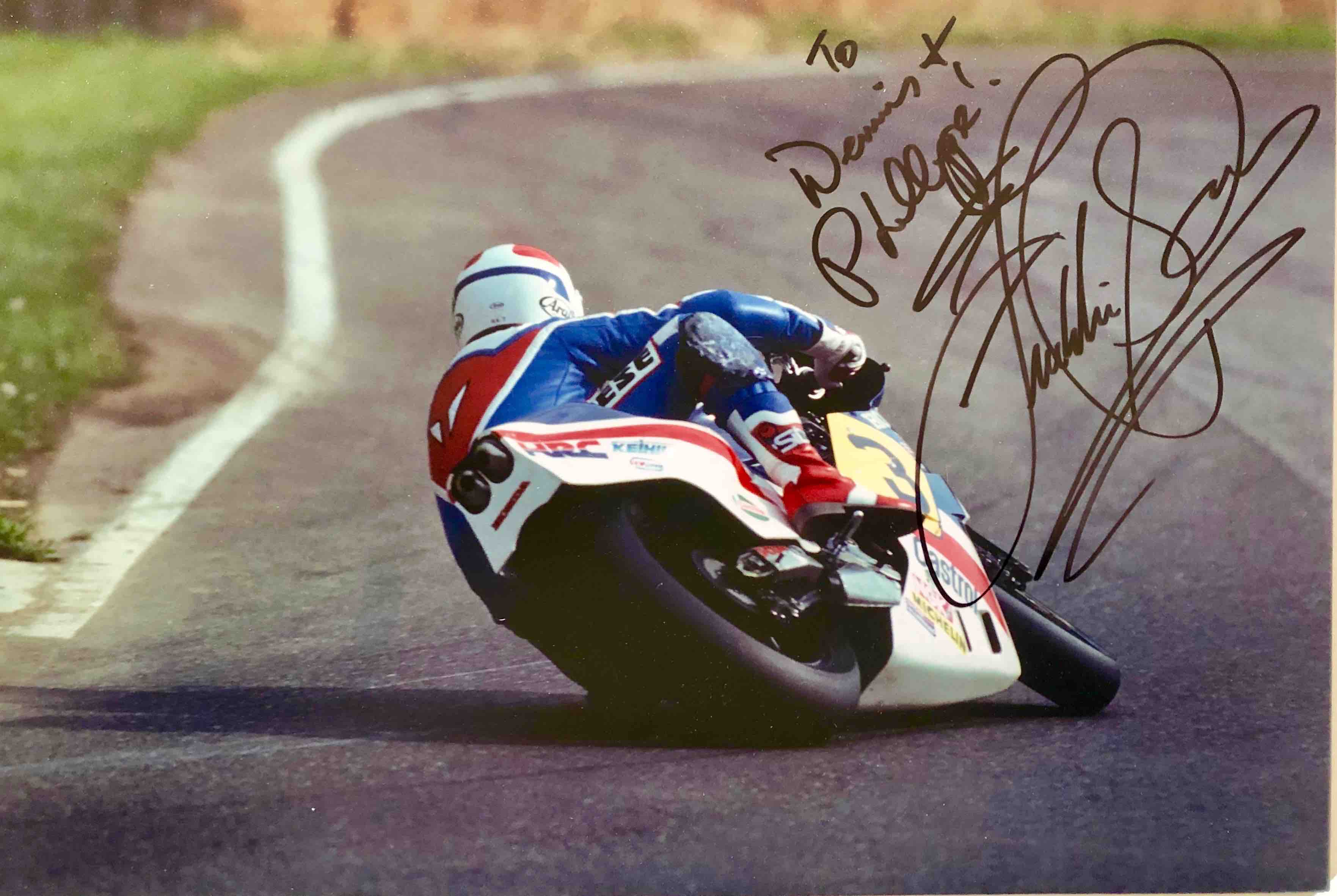